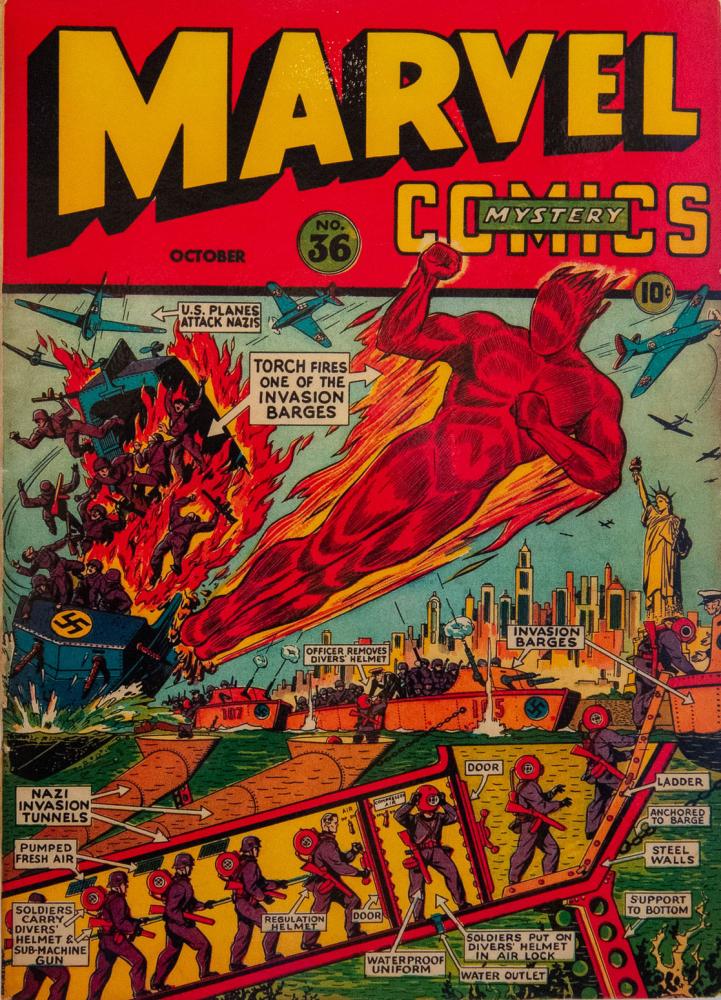 When it comes to the comic book covers of the Second World War, one artist towers over all the others. Alex Schomburg drew the covers for more than 500 Golden Age comic books, working primarily for Ned Pines at Nedor and Martin Goodman at Timely. His unique style is instantly recognizable and comic books featuring his work continue to command top dollar from avid collectors.

He was born Alejandro Schomburg Y Rosa on May 10, 1905, to an affluent family in Aguadilla, Puerto Rico. Along with four of his six older brothers, Schomburg relocated to New York City in the 1920s and opened a commercial art studio that serviced the publishing and advertising business. By the end of the decade he was on staff at the National Screen Service, the company responsible for creating almost all of the movie posters and advertising in the United States.  Schomburg worked primarily on trailers and the advertising slides that ran before the features. In the late 1930s, his facility with a paintbrush opened freelancing opportunities in the pulp magazine business, where he handled covers for everything from aviation to science fiction magazines. Comic book work soon followed.

Alex Schomburg wasn’t the best draftsman to work in comic books; his virtuosity with the figure paled next to the likes of Fine, Crandall, or Eisner. In fact, his style was cartoonish and about as subtle as a punch in the gut. But where other artists were confined by the roughly 7.5-by-10-inch rectangle of a Golden Age comic book cover, Schomburg saw practically unlimited pictorial space and storytelling possibilities. He understood, perhaps better than any other artist, the realities of the comic book business – that tantalizing covers made sales. So Schomburg packed more action into smaller spaces than anyone else ever had, or likely ever will. Comic book historian Ron Goulart once refereed to him as the Hieronymus Bosch of World War II comic book covers. It’s a canny comparison. Much like Bosch, Schomburg’s extraordinary compositions are a cacophony of detail and activity. No space is wasted, and again, like Bosch, the heroes, the villains, and the extraordinary contraptions that occupy all of those vividly contrived square inches are fevered and occasionally the stuff of nightmares. Schomburg specialized in outlandish machinery and impossible torture devices; he practically invented the bondage cover. Every Schomburg design hinges upon that critical, uncertain moment that comes after the hero bursts in, but before the day is saved. How will it turn out?

In the years after the war ended, Schomburg fell in love with the airbrush, and, using that tool, he created stunning Good Girl Art covers for Exciting Comics, Wonder Comics, Thrilling Comic, and others. He returned to the magazine business after getting out of comics, working as a cover artist and illustrator, primarily in science fiction, for the remainder of his long career. Perhaps the most acclaimed cover artist in the history of the medium, Schomburg made a brief return to comics in the late 1970s, drawing a special six-page story for Marvel’s Invaders Annual #1 in 1977. After retirement, Schomburg followed his son’s family to Oregon. He died there in 1998.