The Larry A. Ward Machining Technologies Center – one of the oldest labs on campus – received fresh lighting, flooring, fixtures and, most importantly, new equipment.

A grateful Larry Ward, ’66, helps revamp lab in which he learned

Most people stepping inside a machine shop tolerate a cacophony of sounds. When Larry Ward enters, he embraces sweet music. For him, the noise generated by mills, lathes, computer numerical control machines and related equipment coalesces into a soothing beat. Ward’s senses are so keen to the echoes of manufacturing that he can diagnose a machining problem just with his ears, like a proud conductor identifying the source of a symphony’s rare sour note.

Machinery has produced the soundtrack for Ward’s rich, 50-plus-year career, and thanks to his generosity, Ward has ensured that his “music” will be everlasting at his alma mater. Future generations of Pennsylvania College of Technology students will play Ward’s favorite “songs” on “instruments” furnished by his gift.

The entrepreneur’s donation of more than $1 million – the largest alumni gift in the history of the college – financed the recent revamping of one of the oldest instructional spaces on campus – the machining lab. The 14,299-square-foot facility features fresh lighting, flooring, fixtures and, most importantly, new equipment in the recently christened Larry A. Ward Machining Technologies Center.

“This gift is truly transformational, and that is the very best word I can use to describe it,” said Loni N. Kline, vice president for college relations. “The new lab sets us apart from other programs and is really leading us into the next generation.” 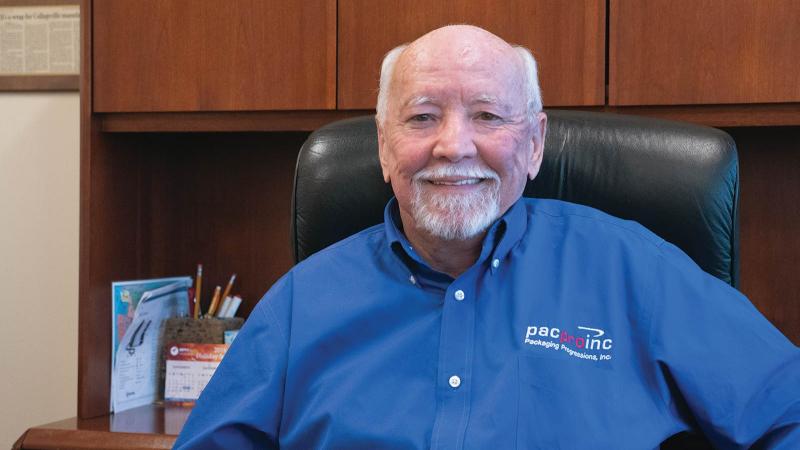 “Mr. Ward, with this donation, has set up the Penn College machining program for the next 50 years,” emphasized Bradley M. Webb, dean of engineering technologies. “I think Mr. Ward’s donation is critical to our ability to continue to put out skilled machinists for all of society.”

The machining lab contains nearly 50 new mills and lathes, as well as cabinets stocked with drill bits, end mills, micrometers, wrenches and other tools required for each piece of equipment.  About 90 students from five manufacturing-related majors receive vital hands-on experience in the space each semester.

“I’m extremely grateful,” said a smiling Christopher M. Schweikert, majoring in manufacturing engineering technology and one of about 50 students who greeted Ward with thunderous applause at the lab’s unveiling. “These new machines really do make a difference to our program.”

“It looks amazing. It’s better than what I was ready to walk into,” added Dakota C. Harrison, a fellow manufacturing engineering technology student. “It has just completely transformed the entire lab, and we really couldn’t have done it without Mr. Ward.”

Without Penn College’s predecessor Williamsport Technical Institute, Ward believes he wouldn’t have been in a position to bestow such a gift. The Corning, New York, native who liked to work with his hands enrolled at WTI in the mid-1960s because of its strong reputation for producing graduates with real-world skills.

He chose engineering drafting technology, which required work in the same machine shop transformed by his recent donation. He successfully juggled night classes with various jobs to be among the first graduates of Williamsport Area Community College in 1966. (WTI became the community college the previous year.)

“I got a skill I could actually use, and they offered a full-rounded education,” Ward said. “All through my working career, I have thought back when I’m doing something, ‘Oh yeah, I remember covering this at Tech.’ I can still draw on things I learned here, today. I just can’t say enough about the education I got here.”

That education led to an eclectic career. Ward designed typewriters for Smith Corona, served as a Navy deep-sea diver and worked as a hyperbaric engineer at the University of Pennsylvania and a project engineer at Exide Battery. He assisted in the design, layout and startup of two manufacturing plants before transitioning to sales and service of packaging machinery and supplies in the late 1970s. 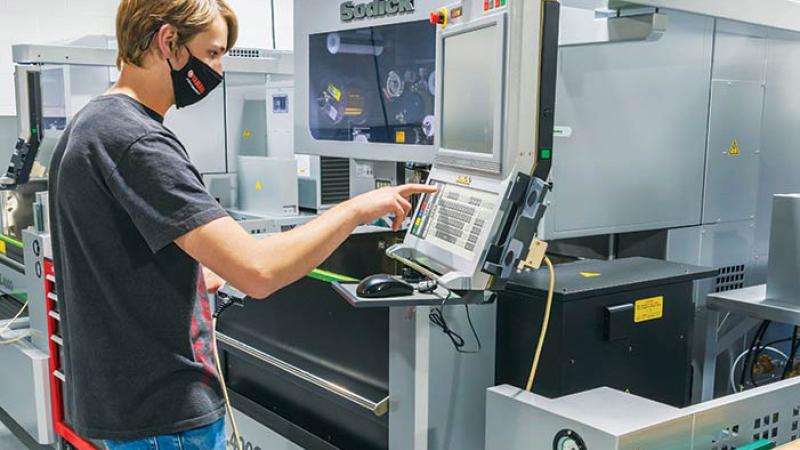 The realization that automation and efficiency were key for manufacturing success inspired Ward to create his own business, Packaging Films and Equipment Co., out of his home in 1981.

He designed automated packaging lines, installed and serviced equipment, and sold the materials that ran on the packaging machines.

In the mid-1980s, Ward invented the Arc-Tronic Hole Perforator, which employs an electric arc to produce clean vent holes in plastic film for all types of packages, including food products. He founded Packaging Progressions Inc. in Collegeville in 1989 to market the device.

With Ward as maestro, Packaging Progressions became a hit, growing from $250,000 in first-year sales to a $30 million-a-year operation. In 2017, the company moved to Souderton and a 35,000-square-foot facility, mostly consumed by stainless steel machinery produced in-house. Today, it’s the world’s leading manufacturer and supplier of high-speed interleaving and stacking machines.

Ward sold Packaging Progressions to the Middleby Corp. in July 2019, and his son, Drew, assumed leadership of the company.

While increasing his workforce from five to about 70 employees, Ward actively recruited Penn College graduates, desiring their hands-on technical experience. In recent years, he donated materials and equipment for the machining and welding programs and began sponsoring a commencement award for mechatronics students.

“When we sat down and thought about this project, the immediate name that came to mind for us that we wanted to display on this building was Larry Ward,” Kline said. “He’s been supportive of Penn College in many ways over the years, and so what better way to engage someone so wonderful.”

“Throughout my career, I’ve always looked for a return on my investment,” Ward said moments after walking through the refurnished lab for the first time. “And when I see these kids here at Penn College, I just feel like I’m getting my money’s worth.”

Howard W. Troup, instructor of automated manufacturing and machining, likened Ward’s gift to winning the lottery with the mortgage due.

“It was just fantastic! That feeling was shared by all my coworkers,” he said. “The machines that we had were being overwhelmed by students. There weren’t enough workstations. The machinery was getting old. It just needed to be replaced.”

The responsibility for choosing replacements fell to Troup with input from Ward.

“Howard was instrumental for the vision of this space, thinking through all the equipment and necessary renovations,” Kline said. “And Larry had some great ideas. His recommendation to us was to get as much automation as possible, because that’s where we are in industry.”

The crew disconnected and removed about 100 pieces of instructional equipment – for the painting, flooring and LED lighting to be completed – before returning about 40 machines and installing nearly 50 new ones.

“We had to attach power to the machines. Most of the time that meant new wire and connectors,” Troup said. “We also had to connect compressed air lines to the new machines.”

In addition to that work, the students used a CNC router in The Dr. Welch Workshop: A Makerspace at Penn College to fabricate 200 tool holders – made of wood and foam – for the drawers of the lab’s new cabinets.

“If it wasn’t for those three students and our own staff, the lab would not have been ready for the start of the fall semester,” Webb said. “It was a feat. We were behind by at least a month because of the pandemic. There were long days and weeks.”

The college auctioned 44 old machines before purchasing the new equipment. The replacements include more than two dozen dual-purpose CNC mills and lathes that facilitate both manual and – adhering to Ward’s wishes – automated operations.

“While CNC is great, we have a fundamental belief that understanding the manual process makes you a better machinist. We start students there and move up into the CNC applications,” Webb explained. “The dual-purpose machines allow our students to get a much broader experience, beginning in their first semester.”

“There’s going to be a wide array of machines that I can say that I know how to use,” Harrison said. “When I show up for my first week of work and they are expecting to train a kid who doesn’t know how to do anything, I can show them that I actually know a thing or two.”

Ward appreciates the college’s approach, which has resulted in a near 100% placement rate for graduates of manufacturing-related programs.

“The students that come out of here are well-trained,” he said. “With manufacturing coming back, Penn College is giving America what we need. We don’t have enough people with technical skills. Penn College teaches them those skills.”

Deloitte and the Manufacturing Institute estimate that more than half of the projected 4.6 million manufacturing job openings during the next decade won’t be filled because of the skills gap. The new lab full of drill presses, surface grinders, dual-purpose CNC lathes and mills, and electrical discharge machines will enhance Penn College’s pivotal role in shrinking that gap.

“The students now have access to the new technology on their own machine, learning and operating that machine during their class period,” Webb said. “They also still have access to the manual skills and to faculty who have worked in industry. Our students are ready when they leave here to really hit the ground running.”

“They taught me here to do a good job, stand behind what you do and you’ll do well,” he said.

“I have done very well, so I want to give it back for the next generation.”