The memory is timeless for Cory D. Karges.

He and a couple of his Pennsylvania College of Technology classmates were clustered in a campus lab, working on a cooperative education project for the General Electric Co. As they imagined possible means to expand GE’s design of a miniature ultrasound system, a knock at the door served as a reality check. 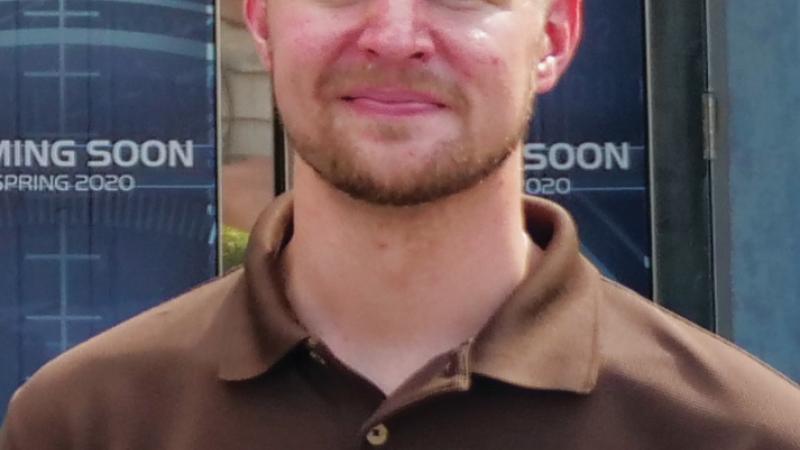 A College Police officer poked her head in to inform the students it was past 11 p.m., and they needed to vacate the building. Karges was stunned it was that late. Time escaped him because he was so enthralled with the industrial design experience.

“We were having fun, making cool stuff,” Karges recalled. “That’s when it clicked: ‘This is what I’m going to do for the rest of my life.’”

Six years later, Karges is on his way to fulfilling that revelation. Unlike his GE endeavor, which couldn’t be shared publicly because of proprietary information, his work today as an industrial designer is seen by millions.

The 2014 graduate is the design manager for Sign Producers Inc., a custom designer, builder and installer of signs for Universal, Disney and other entertainment destinations throughout the world. Sign Producers is responsible for crafting signage that complements and enhances the inviting themes of rides, restaurants and resorts at renowned venues.

Karges’ “playground” is inside the company’s 25,000-square-foot Orlando, Florida, manufacturing facility. In a quiet, open-office space, he employs computer aided design software to master his latest creations. Recent projects include signage for Star Wars: Galaxy’s Edge, a 14-acre showcase at Disney World and Disneyland inspired by the “Star Wars” movies, and Hagrid’s Magical Creatures Motorbike Adventure, an immersive coaster experience added to The Wizarding World of Harry Potter at Universal.

For Karges, the job is a thrill ride.

“Since I’ve started here, pretty much every single project that’s happened at the park (Universal), we’ve been involved in,” he said. “Not too many people can say that they worked on Harry Potter!” 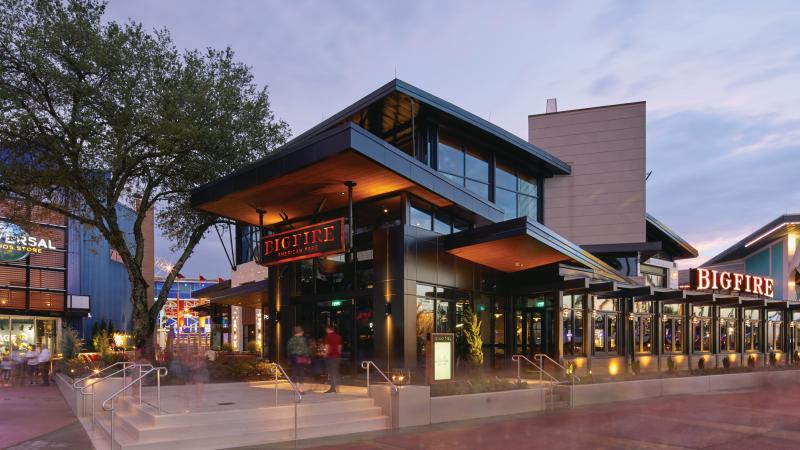 When Karges strolls through the Universal Orlando Resort, he can point to a smorgasbord of signage made by Sign Producers for branding (the letters on the rotating Universal globe), rides (including Harry Potter and the Escape from Gringotts, Despicable Me Minion Mayhem and The Incredible Hulk Coaster) and restaurants (Red Oven Pizza Bakery and Bubba Gump Shrimp Co. among them).

Some of the signs consume several feet in both height and width; others are narrow and vertical. Some fit perfectly atop a low-rise building’s facade; others are fastened to structures high in the sky. Some illuminate at night; others sparkle in the sunlight. All fulfill Karges’ longtime desire to “make really cool stuff.”

“If you have a passion for something, you go for it, and you’re going to get good at it, or else you’ll find something else,” he said. 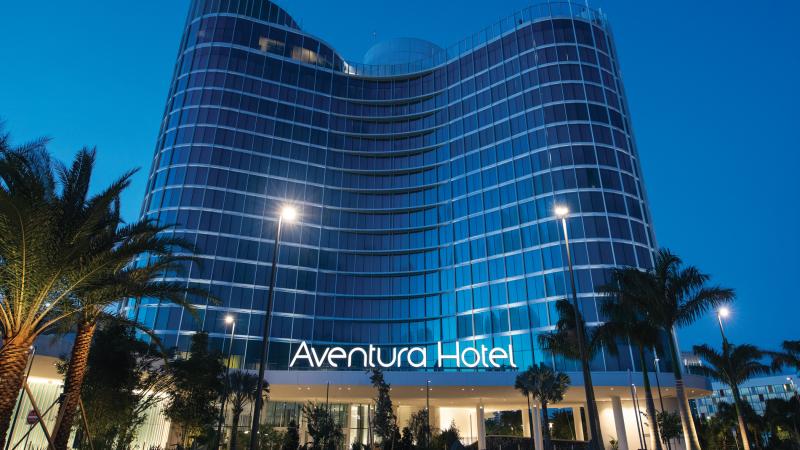 Growing up in Whitney Point, New York, Karges flirted with an information technology career at a local community college. He was good at IT but didn’t possess the requisite passion. Several months of research and soul searching reminded him that he had always enjoyed taking things apart and putting them back together in a fresh way.

“I had glue-gun burns on my hands when I was 5 years old,” he chuckled.

Eventually, Karges discovered the perfect match for his inventive mind: industrial design, the practice of transforming ideas into designs of marketable projects and systems. A tour of Penn College and interaction with Thomas E. Ask, the professor spearheading the school’s then-new industrial design major, convinced Karges to use that program as a career building block.

“I was hooked on Penn College as soon as I met Tom,” Karges said. “We called Tom our ‘champion of industrial design.’ He had as much passion for it as I did.”

One of five students in the inaugural industrial design class, Karges immersed himself in the major, which today boasts over 40 students. He helped start a club for the college’s creative community, the Society of Inventors and Mad Scientists, and relished challenging projects, consistently making the Dean’s List.

I never felt like I had homework assignments. … You were always inventing something.

“Cory wanted to do more than just finish assignments,” Ask said. “He wanted to do an excellent job at whatever he worked on. During his time at Penn College, he combined hard work and passion in a powerful way.”

“I never felt like I had homework assignments, because when you’re there, you’re doing what it is you want to be doing,” Karges said. “So you were always inventing something, creating something, doing some type of study. You learned by going out and doing it, which was every single day.

“Penn College was there to make sure I became all that I could be. I’m very thankful for everything I’ve learned.”

So is Sign Producers. The family-owned firm hired Karges in 2018 after he spent a few years working in Orlando as a design engineer for a fabricator of architectural specialties.

“Sign Producers strives to hire and maintain a level of quality in our employees that can’t be matched,” said Daniel Scimé, company director. “When Cory was referred to us, it was evident that he possessed the work ethic, experience and education we needed to continue to build our department of strong designers. Cory’s passion for what he designs is not only displayed in the details, but also throughout the design process.”

Whether a job calls for a two-day turnaround or a couple years of painstaking work, the process usually involves the same basic steps. A meeting to ascertain client needs leads to a preliminary design created via CAD software. The design team consults with all of Sign Producers’ departments to ensure the idea is functional and structurally sound before presenting a final proposal.

The type of material is a key consideration. Aluminum and steel are used often, but if wood signage matches an attraction’s theme (as in Universal’s Skull Island: Reign of Kong), Sign Producers employs polygem epoxy, an artistic concrete that resembles wood. (The theme parks prohibit wood because of the fire hazard.)

Signage is engineered to “five times what it would actually take to fail,” according to Karges. The signs must withstand tropical storms and hurricanes in Florida, earthquakes in California and the weight of overeager tourists everywhere.

“Any sign close to the ground, we assume somebody is going to jump on it, lean on it or hang from it because they’ve been waiting so long in line for the ride,” Karges explained with a smile.

“If I have a problem or I need to know something, I walk through one door and ask the right people, and it’s taken care of almost immediately, which is cool,” Karges said. “And it’s always a chance to learn something.

“This is a team-oriented place. We all work on everything together. We’re all going to make sure each of us succeeds here, which is way better than feeling like you’re the only one responsible for something.”

One of Karges’ recent projects at Universal was the aluminum marquee for The Bourne Stuntacular, a new show based on the “Jason Bourne” film franchise. Karges called the design – featuring the attraction’s title in three shades of blue and varying amounts of raised lettering – both “fun and challenging.”

So was keeping the work a secret. Theme parks keep a lid on coming attractions until an official announcement is strategically scheduled.

“You’re working on stuff that you can’t talk about, which sometimes is the hardest part of the job,” Karges said. “The new Harry Potter ride was hush-hush for two years when we were working on it.”

To prove his point, Karges cheerfully preempted any discussion of future projects.

“There is a lot of cool stuff coming up. That’s all I can say.”

But Karges revealed his favorite experience related to the job.

“When you go into the park and you’re standing next to something that you’ve made, and a family comes up and takes a picture of it, you’re like, ‘Oh, that’s cool!’ The thing that I made that nobody thinks about is probably in hundreds, thousands of pictures on Facebook and Instagram.”

For Cory Karges, it’s another timeless memory. Only this time, it’s shared. 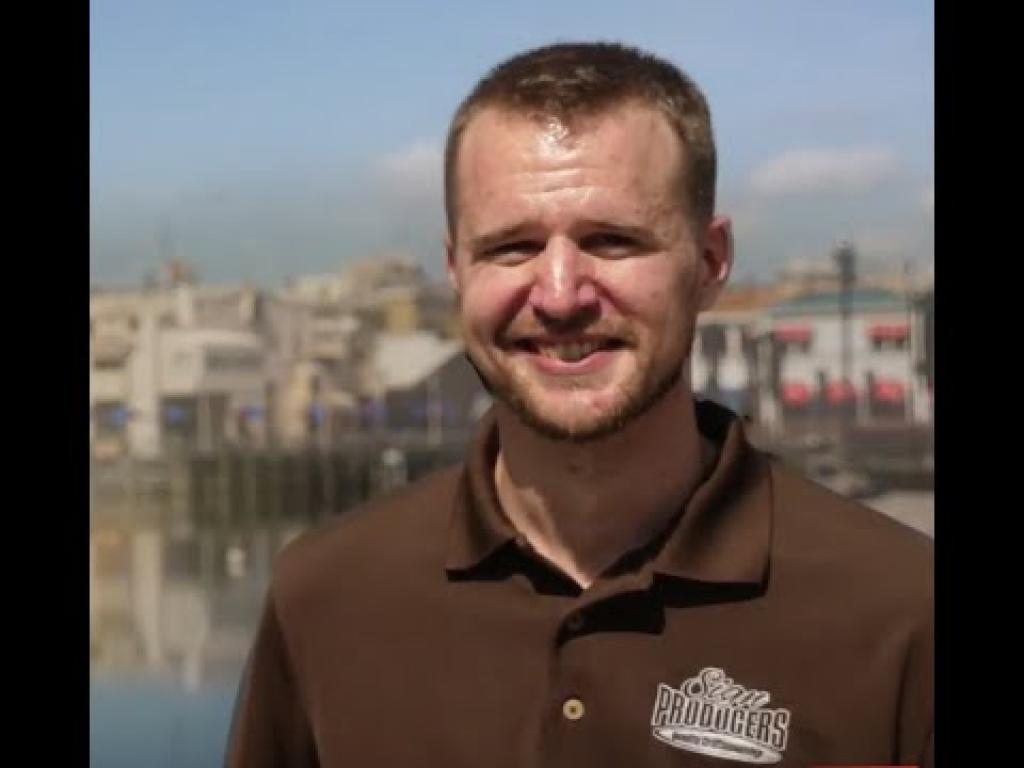 Cory Karges always wanted to “make stuff.” He’s accomplished that goal, thanks in part to his bachelor’s degree in industrial design from Pennsylvania College of Technology. The 2014 Penn College graduate is the design manager at Sign Producers, a custom designer, builder and installer of signs for Universal, Disney and other entertainment venues throughout the world.