One of the fastest-growing sports in the United States is coming to Penn College.

The college announced in September its plans to boost its men’s lacrosse club team to an NCAA Division III sport for Spring 2021.

“We are very excited to elevate our men’s lacrosse club team to NCAA Division III level,” said Penn College Director of Athletics John D. Vandevere. “This is going to make a significant impact on our campus and our department, and it will create another great event for our growing fan base of Wildcat Athletics .”

The national and regional popularity of lacrosse will allow Penn College to expand its recruiting footprint. Lacrosse is the fastest-growing sport in the country, according to U.S. Lacrosse, boasting a 24% increase in the number of high schools sponsoring the sport since 2012, while the college ranks have had approximately 140 new programs begin since 2014. In Pennsylvania, 205 high schools sponsor lacrosse and are sanctioned by the PIAA, while neighboring states New York and Maryland combine for approximately 500 high schools that sponsor the sport.

“We are excited about the prospect of adding one of the fastest-growing sports in the U.S., particularly in the Northeast and Mid-Atlantic, to our intercollegiate athletics portfolio. For years, the lacrosse community has told us that we could readily recruit and field competitive teams,” said Penn College President Davie Jane Gilmour. “Success in this high-intensity sport not only requires endurance, strength and vision, but also demands discipline, strategy and teamwork – characteristics that just so happen to be the hallmarks of a Penn College student.”

Since 2012, Penn College has offered men’s lacrosse as a club program, which generally fields a team of 22 players. The intercollegiate program will have a roster size of approximately 35-40 players and will play its home contests on the newly constructed UPMC Field.

Penn College will compete as an NCAA Division III program in the North Eastern Athletic Conference, which consists of 12 institutions in New York, Pennsylvania and Washington, D.C. The Wildcats are already members of the NEAC for 12 of their 15 intercollegiate sports.  ■ 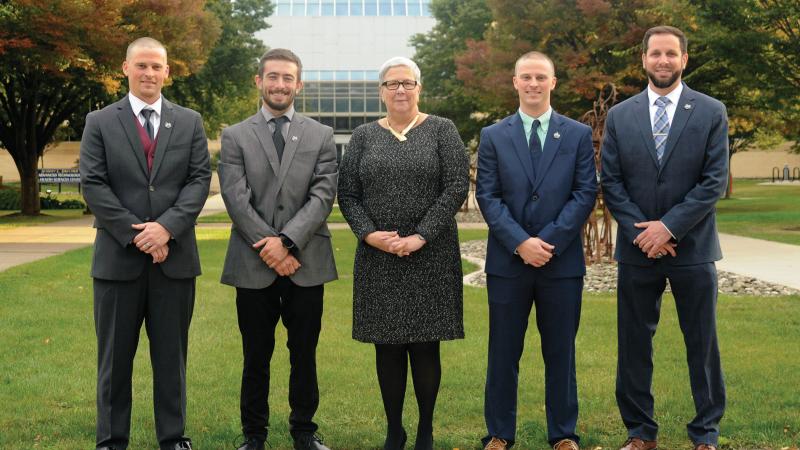 During the spring seasons in 2003-04 and the fall season in 2004, Burrill dominated on the tennis courts for Penn College. In 2003, Burrill won the Pennsylvania Collegiate Athletic Association No. 1 women’s singles championship and was half of the winning doubles entry. In the spring of 2004, she repeated as the PCAA No. 1 singles champ, and that fall she captured the title yet again when the college joined the Commonwealth Campus Athletic Conference.

A center fielder, Zachary Buterbaugh earned three straight Pennsylvania State University Athletic Conference first-team honors from 2012-14. He was named to the United States Collegiate Athletic Association first team in 2014, when he compiled a .442 batting average and ended the season with a 1.46 earned run average and four saves as a relief pitcher.

A four-year starter beginning in 2011, Cody Buterbaugh, a second baseman, was named to the PSUAC first team as a junior. He also won the prestigious conference John S. Egli Scholar-Athlete Award with a perfect 4.0 GPA. Cody repeated on the PSUAC first team his senior season and was a USCAA honorable mention that year.

During the three seasons the Buterbaugh brothers played together on the diamond, from 2012-14, Penn College baseball teams went a combined 71-42.

Brennan was a four-year starter for the Wildcats men's soccer team from 2010-13 and earned PSUAC first-team honors each season. In addition, he won the conference Newcomer of the Year Award in 2010, when he also was a USCAA honorable mention selection, and he was named the PSUAC Player of the Year in both 2012 and 2013. In 2012, he was a USCAA second-team member, and in 2013, scoring 28 goals and recording 60 points, landed on the USCAA first team. He was named the Penn College Male Athlete of the Year in 2013.

Penn College set a school record with 60 student-athletes selected as North Eastern Athletic Conference Scholar-Athletes. The Wildcats finished fifth among the conference's 12 full members and topped their previous mark of 58 selections in 2017-18.

To be selected, a student-athlete competing in a conference-sponsored sport must achieve a combined GPA of 3.4 or higher for the fall and spring semesters and must have been in good standing on his or her team.

Penn College is a member of the Alpha Iota Chapter of Chi Alpha Sigma, which was officially chartered on Jan. 8, 2019, and joins more than 220 Division I, Division II and Division III colleges and universities, including three NEAC schools, in recognizing elite student-athletes who succeed in their sport and in the classroom.

Student-athletes must be in their junior or senior year with a minimum cumulative GPA of 3.4 to be eligible.

Angela L. Hunley, formerly an assistant for NCAA Division II Mansfield University, was named head softball coach. As a player, she was a standout catcher for Bucknell University before playing professionally in Sweden.

Penn College finished third in the North Eastern Athletic Conference Presidents’ Cup. It was the highest finish for the Wildcats since joining the conference in 2014.

The NEAC determines its Presidents’ Cup winner by calculating athletics success, as well as academics, sportsmanship and community service.

Penn College won the Senior Woman Administrators’ Cup for community service after raising $4,168, with 2,225 hours of service and 864 total participants. The Wildcats finished second in the Athletics Direct Reports’ Cup for sportsmanship.

Penn College reached the North Eastern Athletic Conference semifinals for the fourth consecutive season after compiling an 8-3 conference record (10-9-1 overall). The Wildcats tied a program record with seven All-NEAC selections, as Dominique Brown was named to the first team; Tiffany Brown, Francesca Timpone and Taylor Gonzales made the second team; and Abby Williams, Kaelan Cronan and Sloane Tressler were named to the third team.

Penn College placed in the top five at three meets and ended the year with a fifth-place showing at the North Eastern Athletic Conference championship.