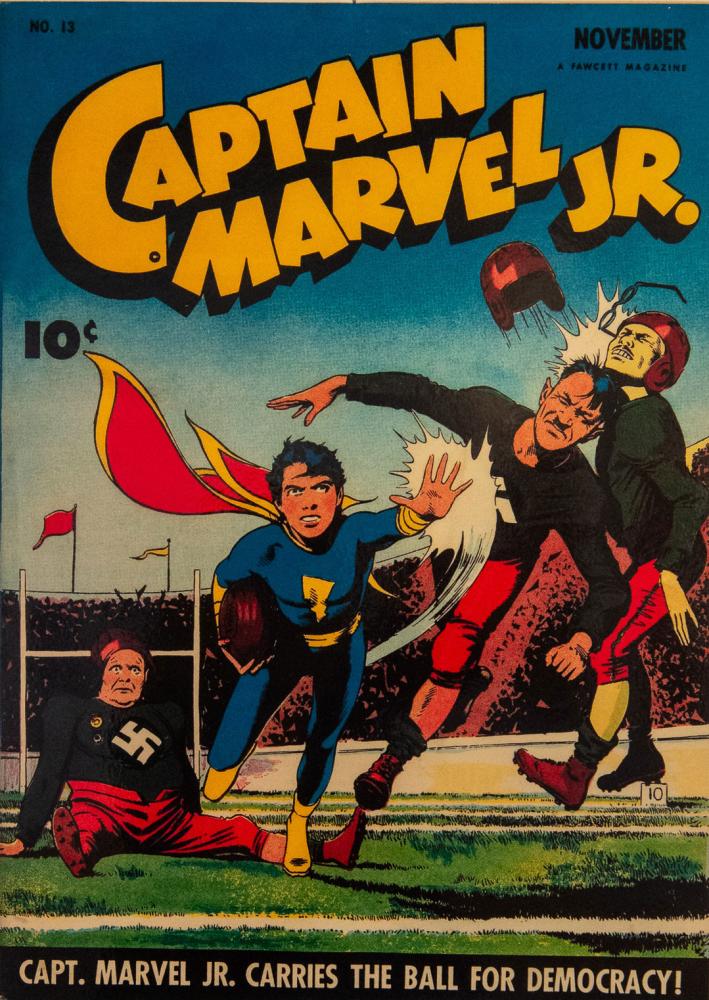 The mysterious, introverted Manuel “Mac” Raboy was born in New York City in 1914 to Romanian immigrant parents. Similar to Lou Fine, the young Raboy honed his artistic abilities at various New York art schools. After graduating from high school, he made a series of Benton-esque wood engravings of Depression life for President Roosevelt’s Federal Arts Project before seeking out higher-paying work in the city. Like so many other comic book artists of the time, Raboy entered the field after responding to one of Harry “A” Chesler’s help-wanted ads. Slaving away for Chesler, Raboy developed his talent on a number of backup features, many of them for Fawcett characters such as Ibis the Invincible, Mr. Scarlet, and Bulletman. His successful tenure with Fawcett’s second-stringers earned him a full-time gig with the company, and in the fall of 1941 he was chosen as the artist for the character that would define his career in comic books: Captain Marvel Jr.

Jack Kirby and Irv Novick had movement. Lou Fine and Reed Crandall were extraordinary draftsmen. Will Eisner was the storyteller. These stellar talents each brought something nuanced and special to the field during the Golden Age of Comics. In Raboy’s case, it was elegance coupled with the exuberance of youth. Unlike Billy Batson, who became a brawny powerhouse upon saying “Shazam,” Freddy Freeman’s transformation into Captain Marvel Jr. left him visually unchanged. And judging by the character’s sales figures, it was clear that young fans identified with Captain Marvel Jr., who was a bona fide star in spite of his status as a “junior.” This meant that it was essential at all times to accentuate Jr.’s youth, while also making him appear capable enough to believably challenge grown-up villains such as his wartime nemesis, Captain Nazi. Raboy’s Captain Marvel Jr. covers and stories are detailed and dramatic – few artists could match his sense of light and dark – and his figures move like no others, especially through the air. No other artist made flight as believable – as weightless – as Raboy. His Captain Marvel Jr. was formidable, fearsome, and forever young.

Raboy wasn’t suited for the demands of the deadline-oriented comic book business. Roger Hill wrote in Alter Ego that he “may have been the slowest artist ever to work in comics.” Raboy left Fawcett in 1944 to briefly become art director for Spark Publications, working on characters such as Green Lama and Golden Lad. But when most of the hero comics folded up after the war ended, Raboy managed to land any cartoonist’s dream job: drawing the Sunday Flash Gordon newspaper strip, an assignment perfectly suited to his lush, meticulous style. He would go on to produce spectacular work for the strip for more than two decades. Raboy was diagnosed with cancer in 1967 and died that December. He was just 53 years old.