While Chef Rob Wood preps in the kitchen, the sunny dining room at JBJ Soul Foundation's Soul Kitchen awaits customers. Messages of hope and the Soul Kitchen’s manifesto decorate the restaurant, which serves 30-40 customers a day. About half of them pay.

Making a Difference With Every Dish

2017 culinary arts and systems graduate Rob Wood is executive chef for the restaurant of a literal rock star, but it’s his customers who inspire him.

by Jennifer A. Cline, writer/magazine editor; photos by Cindy Davis Meixel, except as credited

In a small, modern farm-to-table restaurant in central New Jersey, Executive Chef Robert Wood spends a Tuesday morning prepping for the next day’s customers: He mixes the marinade for maple-glazed chicken, browns butter for a savory cod dish, prepares a peach cobbler, and blends, tastes, seasons then continues to blend a yellow split pea soup.

The fine, fresh food on his menu could tempt anyone’s taste buds. But this chef’s relationship with his patrons, his coworkers and his food is unlike the average restaurant chef.

Since October 2018, Wood has been running the kitchen – and the dining room – at JBJ Soul Kitchen, a “community restaurant” in Toms River.

JBJ Soul Kitchen was founded nine years ago by the Jon Bon Jovi Soul Foundation after the world-famous singer and his wife, Dorothea, visited a restaurant with a similar model. Dorothea was inspired. She envisioned how the JBJ Soul Foundation could build on that model and spearheaded the creation of the Soul Kitchen. The first location opened in Red Bank in 2011.

The Toms River restaurant opened in May 2016 as part of the BEAT Center. BEAT stands for Bringing Everyone All Together. The center provides a location for a food pantry, job training and other community services. 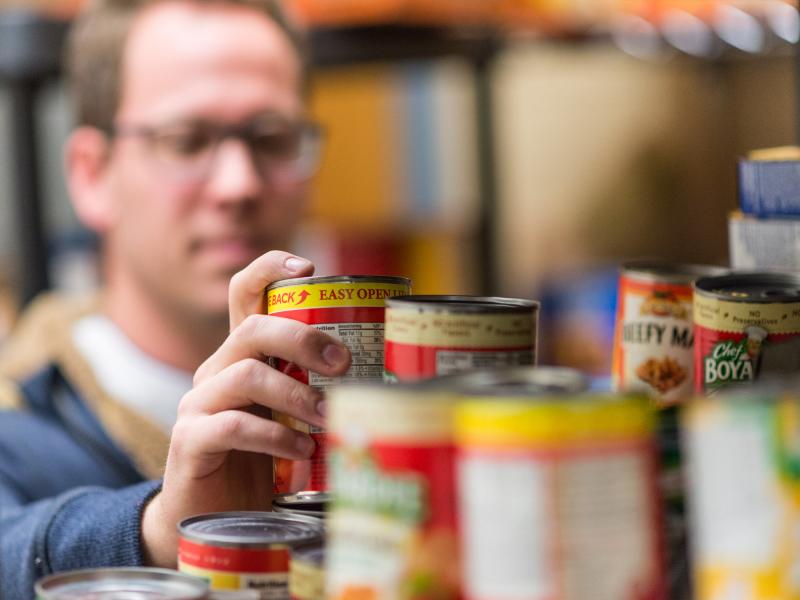 The Cupboard at Penn College is an on-campus food pantry designed to assist Penn College students who are struggling with food insecurity.

The Cupboard was opened in 2016 after a Penn College Dining Services survey found that 58.9% of students who responded had skipped a meal at least once because they did not have the money or resources to eat.

Happy are the hands that feed

Inside the restaurant, Wood, along with a sous chef and a social worker, is one of just three paid staff members.

“We are 90 percent volunteer-run,” the 2017 Pennsylvania College of Technology graduate explained.

In fact, 2,000 people volunteer at the two JBJ Soul Kitchen locations. Just like its customers, some are food insecure; others are not. But all share a desire to help the nonprofit restaurant and those who dine there.

Helping others improves a person’s outlook. It provides a sense of hope and empowerment. Helping one another builds relationships and bonds communities. Research studies have long proven those facts. Wood sees the proof in the lives of those who join him as volunteers.

“It’s not just free food,” he said. “They’re helping, becoming part of the community. They’re helping us to stay open, because without them, we couldn’t exist.”

About half of the Soul Kitchen’s customers pay for their three-course meals. (The suggested donation is $20.) Forty-six percent earn their meals through volunteering.

“If they don’t want to, or they can’t, or they think that they can’t, then we don’t push it,” Wood explained. “We suggest: ‘Hey, if you’re done eating, if you want to clear your table, that helps us out a long way. If you want to come in a little bit early and help us sweep out the place, that helps us. Or we’re getting ready to close, do you mind taking out the trash?’ Little things like that kind of help them feel like they’re not getting a handout. … We’re empowering them in some sense. They’re helping us, and we’re helping them, and it’s kind of a team effort.” 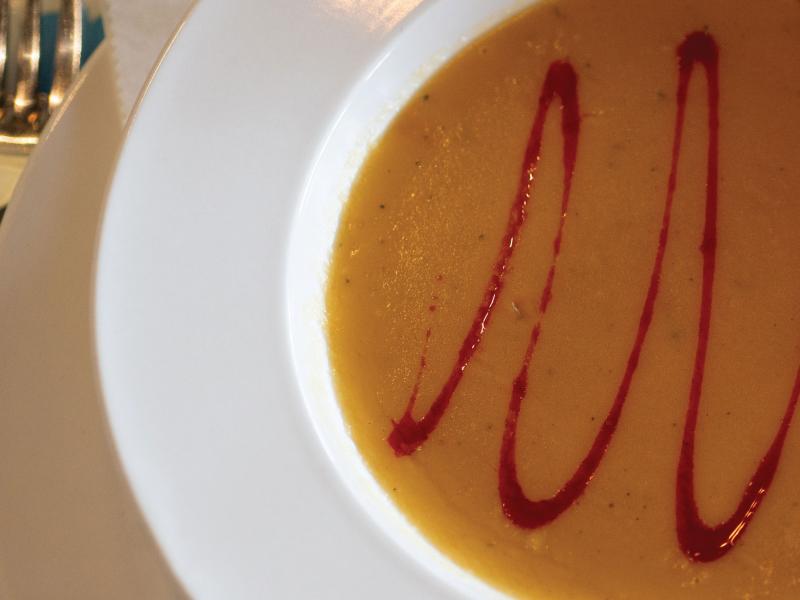 What does ‘food insecure’ mean?

According to the U.S. Department of Agriculture, the defining characteristic of very low food security is that, at times during the year, the food intake of household members is reduced and their normal eating patterns are disrupted because the household lacks money and other resources for food.

Helping others is making a positive impact not only on those who volunteer at the Soul Kitchen. It puts a smile on Wood’s face, too.

Wood grew up just 20 minutes from Toms River, participated in sports and spent a lot of time on the beach. He didn’t focus much on his grades – until his sophomore year in high school, when he wanted to impress a girl. Before he knew it, he was at the top of his class. But still unsure what he wanted to do, and feeling it was too late to apply for college, he joined the Marines, serving for eight years as an air-ground task force planner.

While stationed in Japan, Wood invited the five to 10 Marines who worked for him to his home for dinner on Wednesdays. He wanted to give them a break from barracks life and the mundane “chow hall” menu.

The instant gratification he felt when seeing whether his guests liked his food sparked an interest in cooking.

After his return to civilian life, Wood pursued an associate degree in culinary arts from Brookdale Community College. He was older than many of his classmates and found himself acting as a mentor and tutor – another role he savored. That sparked an interest in teaching.

When he was told that teaching culinary arts requires a minimum of a bachelor’s degree, that’s where he set his sights. And that led him to Penn College.

According to Wood, caring instructors are key to the quality of the Penn College culinary arts program.

“Rob always volunteered when given an opportunity,” Suchwala said. “He was always a help to anyone that asked, is good-natured through and through, and has a great deal of patience. He is a responsible, selfless and driven person with a lot of heart.”

Wood volunteered with Suchwala as the chef-instructor developed “A Taste of Technology: Sweet and Savory Science,” which presents the chemistry of food and its reaction with our taste receptors. Suchwala and the college’s School of Business & Hospitality have twice taken the popular hands-on demonstration to the USA Science and Engineering Festival in Washington, D.C. Wood was part of the first team that made the trip.

When Wood was selected to give the student address at commencement, he saw it as another opportunity to be of service. At the time he found out, he was recovering from the shock of a breakup and, with it, broken dreams.

“The announcement for this honor was a rainbow after quite a rough storm,” he told the audience. “It reminded me that good things are yet to come.”

Wood’s speech encouraged the graduates to fight through the hard times that will come, because they are just as necessary as good times.

“It’s getting knocked down that teaches us how to fight,” he said. “It’s our failures that show us where we need to improve. If you’re struggling through a storm in your life, keep your head up. It’s the only way you’re going to see that rainbow. I know.”

“Anyone who watches his graduation speech can see the man he is and how deeply he cares about others,” said Suchwala, who nominated Wood for the honor. “I play that speech for all my new students.”

After graduation, Wood began work as a cook in nursing homes. He was the food service director at Seacrest Village in Little Egg Harbor when one of his community college instructors called to let him know about an opening at JBJ Soul Kitchen. Wood insisted that he was not looking for a job, but the instructor asked him to consider it.

So Wood visited the Red Bank location, learned about the operation, and said, on the spot, “I’ll take the job.”

Though his ultimate goal is still to become a teacher, he’s relishing the chance to serve others as they fight through their personal storms. Seeing the difference the Soul Kitchen makes helps to fuel him through 60-plus hour workweeks. It nourishes him to tirelessly take on any task when there isn’t a volunteer to do it.

He takes extra care to make sure his menu has dishes that appeal to adults and children, to those with dietary restrictions, and most of all, that it is nutritious.

“These are people who are food insecure, who need the meal,” Wood said. “So you’re looking to make sure it’s healthy, that it’s substantial, farm-to-table type food.”

Wood changes the restaurant’s menu every two weeks to offer variety to its clients, since some eat there every day it is open. Each time, he sends the menu to Dorothea Bongiovi for final OK.

The main ingredient is love

Service does not stop with the food.

A social worker on staff sits down with diners to get to know them and connect them with resources. A volunteer Employment Empowerment Team provides help with job skills, from brushing up a resume to more in-depth job coaching.

“It goes a long way when you can actually see the difference you’re making in people’s lives, seeing them change while you change,” Wood said.

He talks about volunteers who began coming to the restaurant in need and now are working, but continue to give their time.

“A big part of what we do here is providing to those that are unable to provide for themselves for some reason or another,” Wood said. “It could be they just lost their job or someone just got sick. We don’t judge on anything like that. Someone could be driving in with a brand new Mercedes, and that might be the last time they have that Mercedes.

“We don’t know what someone’s going through,” he added. “But we’re just advocates for them. We want to provide them what we can. If it’s not the food, it’s the services. It’s getting them in contact with the right people.”

Where there is love, there is plenty

Since opening, JBJ Soul Kitchen has served more than 100,000 meals at its two restaurants.

“We’re just small people in the whole situation,” Wood said. “The people that really make the difference are those that come in and volunteer. At the end of the day, this is my job; I’m getting paid for this.

“It goes a long way that people do still care about people. They pay it forward. They help out where they can, when they can. And a lot of times you’ll notice that the ones that have the least are willing to give the most. That drives us. That makes us want to work harder, want to do more, want to provide the best food, the best experience we can.” 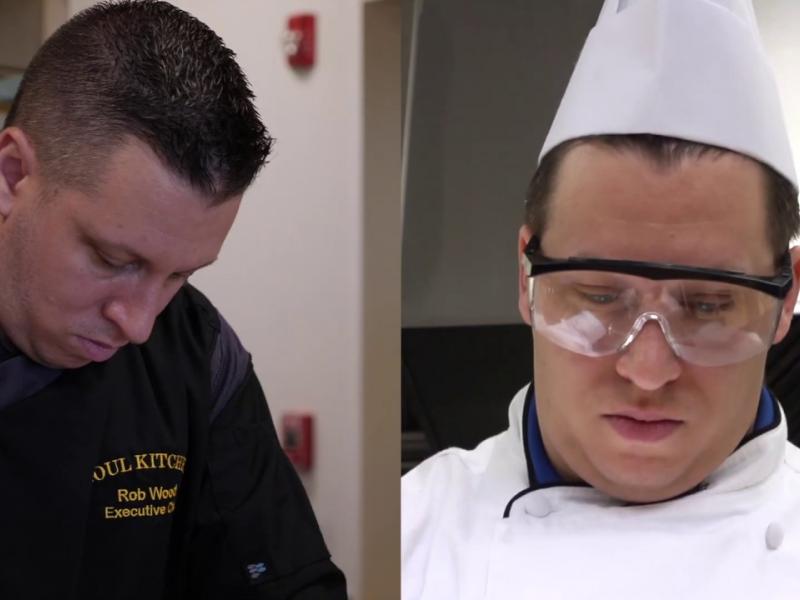 Robert Wood loves to give back. The Pennsylvania College of Technology alum lives that credo daily as the executive chef at JBJ Soul Kitchen in Toms River, New Jersey. As part of the Jon Bon Jovi Soul Foundation, JBJ Soul Kitchen is a nonprofit community restaurant that serves paying and in-need customers.