On April 8, at the age of 51, Cindy Spinello lost her battle with breast cancer. For the last four years of her life, she worked tirelessly for changes that would help countless women, even though it was too late to gain the benefit herself.

Cindy Spinello spent her career working in health care. The 1984 Williamsport Area Community College graduate worked for nearly 30 years as a dental hygienist, including 10 years as a part-time instructor in Pennsylvania College of Technology’s Dental Hygiene Clinic, and was pursuing a physician assistant degree from the college. The wife and mother was the picture of proactive health care, getting regular mammograms and annual physical exams and performing regular self-breast checks.

Cindy Spinello, ’84, advocated for legislation that she hoped would help to prevent other women from her fate: late-stage breast cancer not detected by mammograms.

Still, it was not until she felt enlarged lymph nodes on her neck that she was diagnosed with breast cancer that had spread to her spine, stomach, ovaries and numerous lymph nodes.

Cancer that has spread, or metastasized, to other organs is known as stage 4. Stage 4 cancer is considered incurable.

“I had dense breast tissue, and no one told me,” Spinello said in a February interview.

Dense breast tissue is normal: It comprises glands, ducts and fibrous connective tissue. When radiologists read a mammogram, they classify a woman’s breast into one of four categories, from mostly fatty to extremely dense. Because both dense tissue and tumors appear white or light gray on a mammogram, the dense tissue can hide cancer.

Spinello was diagnosed in July 2012. She had just completed prerequisite courses and been accepted to the competitive-admission Physician Assistant Program. She was to begin program-specific classes in four weeks. Instead, she underwent surgery to remove her ovaries and began a hormone treatment to subdue her estrogen-fed cancer.

Spinello was shocked. Her husband, Greg, went into action. 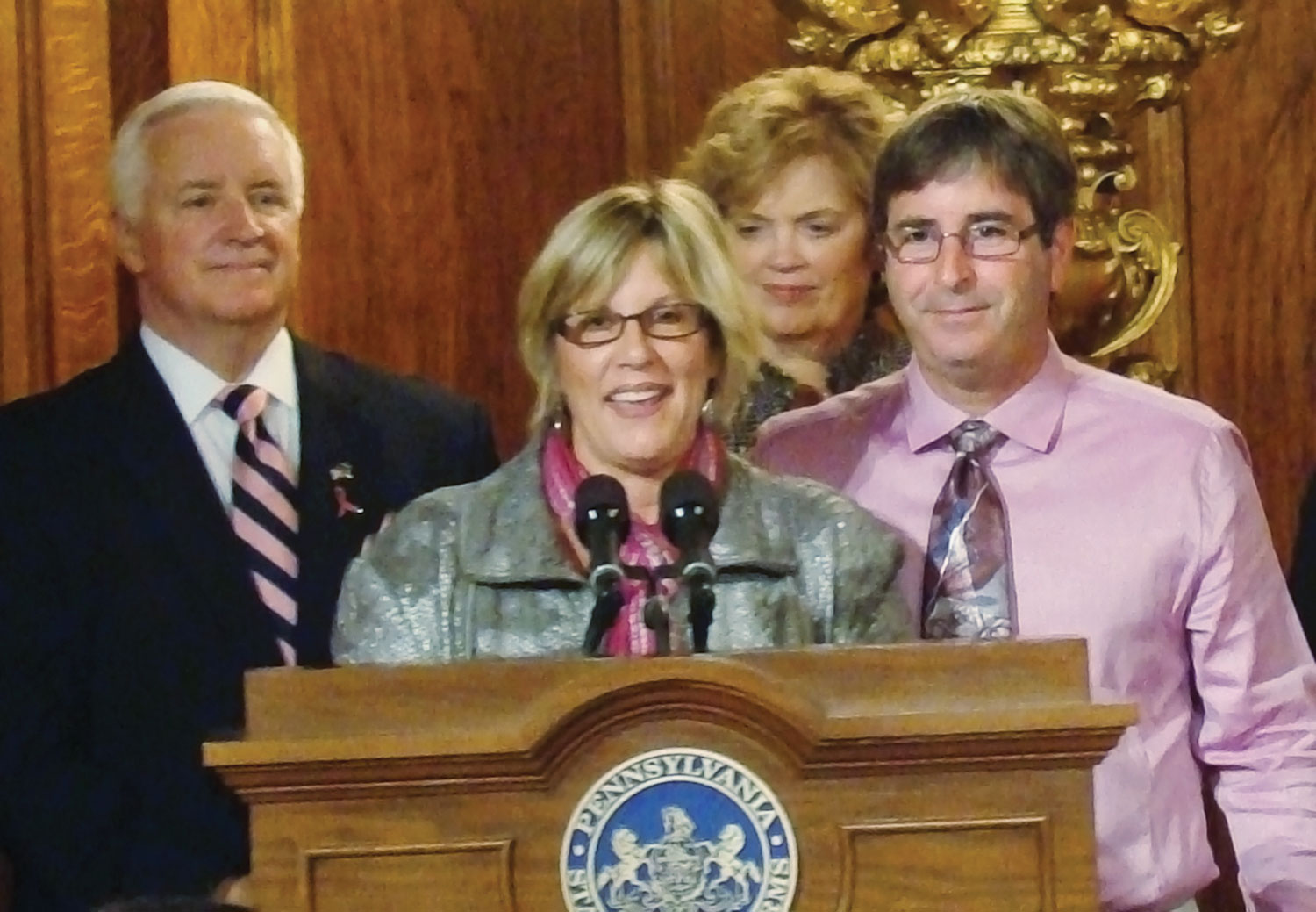 Backed by her husband, Greg, right, and former Gov. Tom Corbett, Spinello speaks at the signing of the Pennsylvania Breast Density Notification Act.

“You know, men always want to fix things and make them better,” she said. “He couldn’t do that.”

What he did do was write 200 Pennsylvania legislators. He found the Pennsylvania Breast Cancer Coalition and legislation it had been advocating that would require Pennsylvania mammography centers to notify women of their breast density. With that knowledge, women who have dense breasts can speak with their physicians to determine whether to pursue further testing via ultrasound or MRI.

By September – less than two months after her diagnosis – Cindy and Greg had joined the coalition’s effort, sharing Cindy’s experience.

“My story can’t change now, but we can change it for other people,” she said.

“Cindy spoke up for other women so that they would not have the same tragic results that she did,” said Dolores Magro, director of patient advocacy for the Pennsylvania Breast Cancer Coalition. “She spoke at meetings, rallies and was quoted in our newsletters that reached hundreds of thousands of households.

“Without someone like Cindy selflessly telling her story, the dense breast issue would be an abstract idea. She offered her voice, her face and her story to provide the much-needed personal element that people could relate to. She and another woman became the public faces of women diagnosed with breast cancer at stage 4 because of their breast tissue density.”

The legislation was not without opposition, Spinello said, because ultrasound and MRI can produce “false positives”: They may reveal suspicious lesions that are determined to be benign after biopsy. Along with the financial cost of biopsy, those initial “positives” can cause anxiety. 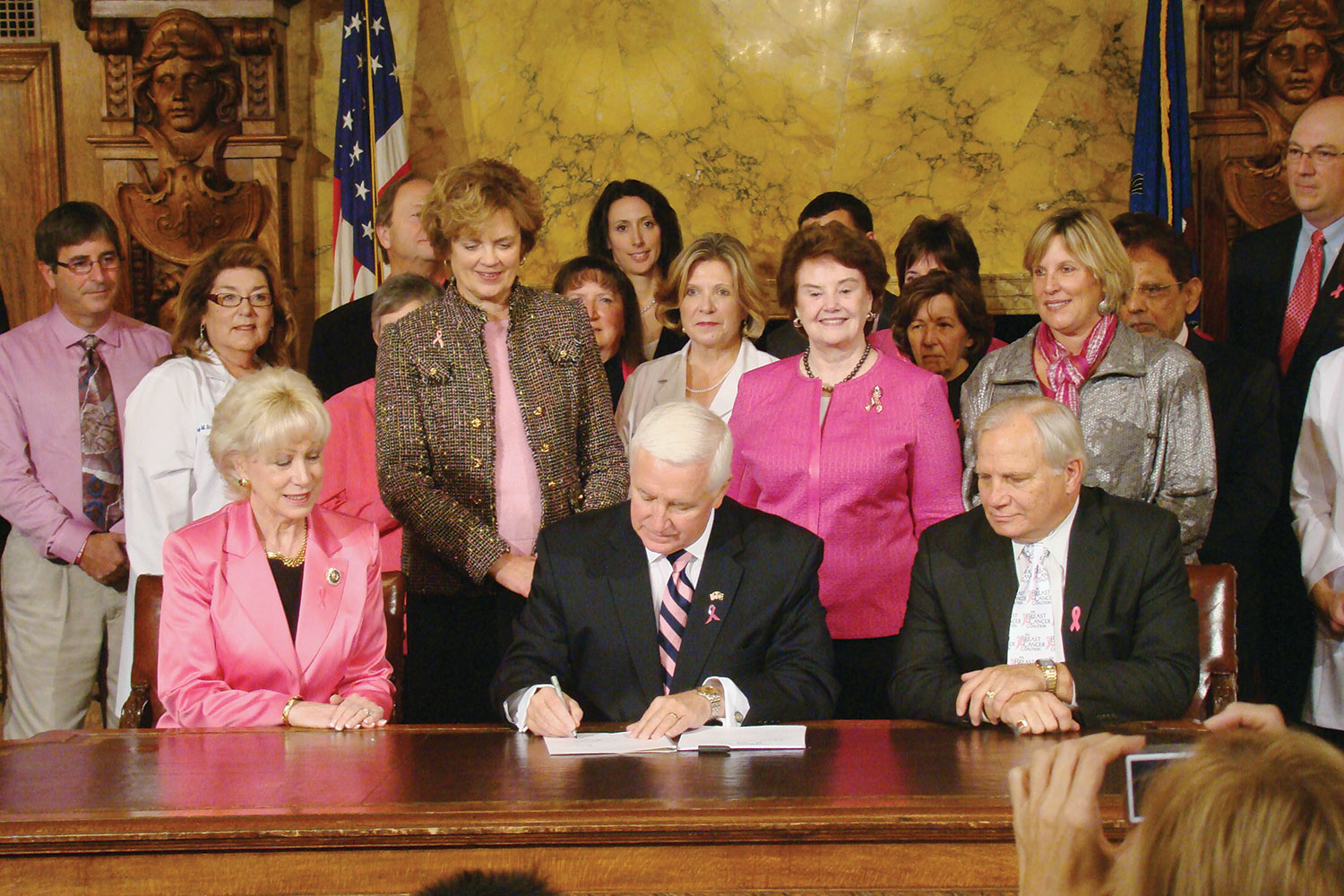 “I say that it’s better to receive a false positive than a false negative, like I did,” Spinello said.

On Nov. 1, 2013, the Pennsylvania Breast Density Notification Act was signed into law.

“The most important thing about this legislation is to make women aware so they have more choices and can speak with their doctor. … It can save their life,” Spinello said in a Pennsylvania Breast Cancer Coalition video.

Spinello’s advocacy for other women didn’t end with the passage of the legislation. She continued her work with the coalition as a member of the Dense Breast Advisory Committee, surveying mammography facilities to learn how they were complying with the act.

“Without someone like Cindy selflessly telling her story, the dense breast issue would be an abstract idea.”

“The feedback we’ve gotten is 100-percent compliance,” she said, adding that she had received notes of thanks from women for whom the legislation had made a difference.

“That makes it worth it,” she said.

Yet, she wanted to do more.

When Spinello was diagnosed and began treatment, her friend Lisa Bernard made hand-stamped thank you cards for Spinello to send to those who had lent a helping hand. Making cards, she decided, was something she could do while she was recovering, so Bernard lent her supplies, and the two made stacks of greeting cards with a plan to sell them to raise funds for breast cancer research.

Calling their venture “Cards of Hope,” Spinello and Bernard placed the cards in a few offices around Lewisburg, where they lived, and sold them in packs of four for $5.

Cards of Hope raised $8,200 for the breast-cancer research of Dr. Craig Meyers at the Penn State College of Medicine. Meyers’ research, published in the August 2014 issue of Cancer Biology & Therapy, determined that a virus not known to cause disease kills triple-negative breast cancer cells and killed tumors grown from these cells in mice.

They kept making cards, raising $4,000 for the Pennsylvania Breast Cancer Coalition, and $1,500 for Are You Dense Advocacy Inc.

“It made me really happy to be able to do something like that,” Spinello said.

She also traveled to Washington, D.C., to share her story with lawmakers as she helped Are You Dense to advocate for federal dense breast notification legislation. Are You Dense was founded by Nancy M. Cappello, who, like Spinello, was diagnosed with late-stage breast cancer that was not found on mammograms because of her dense breasts. Cappello spearheaded passage of dense breast notification legislation in her home state of Connecticut, which was the first to pass such a law. Spinello became the organization’s Pennsylvania representative.

She had planned to return to the nation’s capital with Are You Dense in Fall 2015, but a recurrence caused her to miss it. This time she had stomach pains, and exploratory surgery found a tumor in her small bowel and mesentery, the lining of the intestines. After three years, her cancer had become resistant to hormone therapy. She recovered from a surgery to resection her bowel and began a pill form of chemotherapy.

Over lunch in February, more than 3.5 years after her initial diagnosis, Spinello said she felt “pretty blessed.” She explained that the life expectancy with stage 4 breast cancer is a year and a half, and 15 to 20 percent of women live five years after they’re diagnosed.

“Every day is a good day,” she said. “Some are just better than others.”

She was busy being a tennis mom to her son Tyler, then a high school senior, and planning to leave in a few days for a cruise with Tyler, Greg and her nephew. If she kept feeling well, she hoped to make a return trip to speak with Washington legislators in the spring or summer.

“I think you get to the point where you don’t think about tomorrow,” she said. “It’s a lifestyle you have to learn, when you don’t fret about tomorrow because that takes away from the quality of today. When you have metastatic cancer, things can change in a day. My son and my husband, but my son, especially, have helped me. When you have a child, it motivates and inspires you to live for each day and enjoy the day you have with them.”

She was also advocating for another research grant, this one by Dr. Elizabeth McDonald of the University of Pennsylvania.

McDonald is studying better imaging for breast cancer using positron-emission tomography (PET scans) with a radioactive agent that binds itself to a cell protein (Sigma 2) that is known to be more highly concentrated in malignant tumors than nonmalignant tumors.

Spinello’s role was to ensure that the researchers’ abstracts were understandable for the lay person. Later, if funding were approved, she would represent patients to ensure they were being taken care of.

“I am excited to utilize my knowledge and experiences as a stage 4 metastatic breast cancer patient and my breast cancer advocate activities to assist with and support this promising research,” she wrote in a letter of support for the grant.

In late March, Spinello entered the hospital, where she learned that the cancer had spread to the lining of her brain. She did not recover. The grant she had been advocating for was awarded days after she died.

Spinello explained how she turned initial anger at her diagnosis into a drive to help others.

“Countless women across Pennsylvania will benefit from her determination to ensure that they will not face the same struggle she did,” a tribute to Spinello on the Pennsylvania Breast Cancer Coalition website says. “We will never forget Cindy’s strength, courage and hope. She was a good friend, a fierce fighter and a true advocate.” ■

Spinello shared her story and her face to help the Pennsylvania Breast Cancer Coalition in its quest for legislation that would require mammography centers to notify women if they have dense breasts.