An internship on a Montana reservation makes for “the best summer” of a forest technology student’s life.

A collegiate internship can cut a number of ways.

Perhaps there’s an uninspiring or unavailable boss, who provides nothing more challenging than copying, collating and coffee runs – all in the name of unpaid labor.

Or maybe it’s being relegated to a shared office, crammed like an afterthought between the restroom and a supply closet, with no windows and a fluorescent light that blinks and buzzes. All. Day. Long.

Or for Katalynn M. Thomas, like many Pennsylvania College of Technology student interns, it could be a rewarding “once-in-a-lifetime experience” that closely mirrors the institution’s laboratory learning and offers a credible approximation of the working world.

A buffalo jump is among new sights for forest technology student Katalynn M. Thomas, who spent a summer assessing woodlands on a reservation in Lame Deer, Mont., for the Bureau of Indian Affairs. “At the bottom … you could find pieces of fossilized buffalo bones,” she says.

“There were horses everywhere out there, and they could do pretty much whatever they wanted,” Thomas says. On this day, she was elated to get close enough to join them in a photo.

Thomas – who has a fear of heights – takes a 30-foot leap at Tongue River Reservoir, a Montana state park about an hour from the reservation. “I only jumped twice, while the others just kept going.”

In what she characterizes as “the best summer of my life,” a watershed experience second only to graduating from Parris Island, South Carolina, as a Marine, Thomas helped the Bureau of Indian Affairs-Rocky Mountain Region assess woodlands within a 445,000-acre reservation in Lame Deer, Montana.

“You know how people say, ‘If you have a job you love, you’ll never work a day in your life’? Well, that’s how it was for me that summer,” said Thomas, who earned an associate degree in forest technology in December.

“The experiences I gathered … will stay with me.”

“Waking up in the morning was no trouble because I enjoyed what I was doing. I understood it, and I knew it had a purpose. Having been able to be in a major that I truly loved – and didn’t have to settle for – made all the difference.”

Thomas was one of two Penn College students assigned to western work crews alongside forestry management technology students from Horry-Georgetown Technical College in South Carolina. She spent 13 weeks of the summer of 2015 with five students in Montana, while classmate Dalton C. Dougherty (who also graduated in December) was on a two-person team surveying black walnut trees in Winnebago, Nebraska. 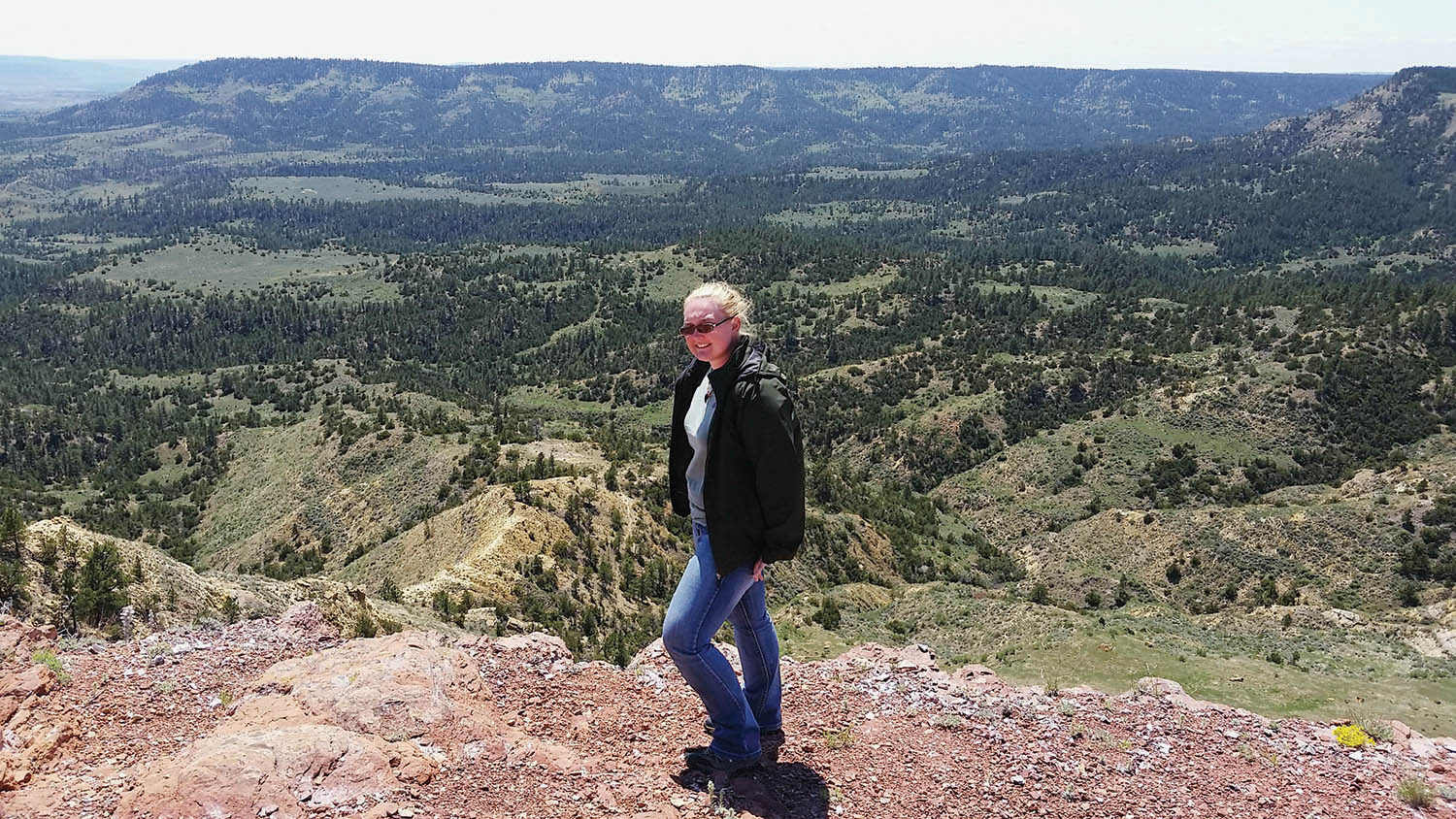 “Here I am, somewhere on the reservation,” Thomas says of this photo, taken during the first week of her internship. “The distance you can see from one area to the next is absolutely incredible!”

“I was out in the wild all summer, interacting with trees and wildlife! There aren’t many majors that provide that – let alone the chance to have an internship in such raw country,” Thomas said, noting that many of her rise-and-shine moments brought stiffness from the often-arduous work of conducting a Continuous Forest Inventory among steep, mountainside stands of Ponderosa pines and junipers. “Most mornings I woke up sore, but always ready for more.”

Continuous Forest Inventory is used to determine the health of a forest and the capacity an area has to grow, as well as helping to develop a management plan. It is a process called mensuration, estimating the condition and productivity of a timber stand, well-known to forestry students who learn it in-depth among the natural surroundings of the Schneebeli Earth Science Center south of Penn College’s Williamsport campus.

“We had to cover plots that were burned in fires from previous years, as well as plots so thick you had to push your way through,” the 25-year-old explained, noting the ease with which the locals, many of them her elders, could traverse the landscape. “It was funny to think that where we were having trouble getting up some of those hillsides, they could’ve been up to the top and back down already.”

A typical day started at 7 a.m. and usually consisted of driving a good distance to the plots, said Thomas, who lives in the Columbia County community of Stillwater. The goal for each day was three plots, each with two locations that needed to be covered. Access was simpler on some days when “the GPS was in a good mood”; other mornings required a hike of at least a mile, workers laden with gear.

“Dressed to the nines in our cruising vests, loaded down with hammers, nails, tree tags, loggers’ tape, spray paint, compasses and clinometers – oh, and plenty of water – we soldiered our way through to the plots,” Thomas recounted. “Sometimes, we had music playing. Most of the time, we just had each other’s company to keep the mood up.”

Some of the plots had few trees, and others had so many that it took a good portion of the day to take stock.

“After we finished measuring the trees that were already tallied from the previous inventory, we had to go through and check for new growth,” she said. “Trees that were 5 inches in diameter, and within the limits of the plot, were tagged and tallied. They had joined the ranks!”

Some of the plots had to be abandoned quickly because wildlife “was not particularly thrilled” with human encroachment on their habitat. Bears were big players in some of the terrain, and usually in combination with rattlesnakes.

“So the one time, while we were scooting off the hill to get away from a bear that had circled us and was coming closer and closer, we had to keep a close lookout on the hill, right? The sun was facing it directly and it was rocky – perfect for sunbathing rattlers – so we were worried about a bear from behind and snakes underfoot.”

On the upside, Thomas had one lucky discovery that summer: learning that poison ivy has no effect on her.

“Some of the others, though, would get it so bad they needed a shot to relieve it,” she said. “You’d swear the area wasn’t going to let you out alive!”

“I was out in the wild all summer.”

Approximately 5,000 people live on the reservation, which borders the Crow Agency and the Tongue River. Most are Northern Cheyenne, who call themselves Tsis tsis’tas (“the beautiful people”), but members of other tribes, as well as non-Native Americans, also live there.

In their company, Thomas endured adventures both cultural and culinary, taking part in a number of goosebump-inducing customs and dining on such local fare as elk burgers, mule deer, grouse and a fried delicacy known as the “Navajo taco.”

“To be a white person participating in some of their rituals was an experience I’ll never forget,” said Thomas, who honored the sanctity of a ceremonial sun dance through a respectful reluctance to talk about it.

“Their stories and their histories are so rich, and so different than my own, and the experiences I gathered from them will stay with me,” she said. “I made a couple great friendships with some of the people there, and I still keep in touch with them.”

There was also the spectacle of wild horses running free and the area’s scenic big-sky grandeur, not to mention side trips warranted by the proximity to Yellowstone National Park and Mount Rushmore.

Add it all together, and it amounts to a meaningful internship: validation of skills learned from her professors and an invitation to other students to open wide the door when opportunity knocks.

“If you get the chance, take it,” Thomas said. “You don’t know where it may lead.”