The groundbreaking for a new bridge this fall will mark the first tangible progress on a highway construction plan that has been decades in the making. A 2008 alumna will oversee it.

Maggie (Powers) Jackson, ’08, is project manager for a $669 million construction project that will result in a limited-access highway that stretches from the current freeway end on Route 15 north of Selinsgrove to the four-lane section of Route 147 south of Montandon. Photo by Larry D. Kauffman.

U.S. Route 15 is the only major north-south route through central Pennsylvania.

That means, when the divided highway leading north from Harrisburg ends, and the route tracks through a bustling business district, drivers have little choice but to adjust their freeway-driving mode and call to let loved ones know: “I’m stuck on ‘the strip’ in Shamokin Dam.”

Every day, as many as 40,000 vehicles travel Route 15 – conjoined with Route 11 – through Hummels Wharf and Shamokin Dam, about an hour south of Williamsport. The 4.5-mile “strip” contains 24 intersections, nine traffic signals and 101 driveways that lead to homes, restaurants and retailers of every sort.

It provides a challenge not only to through traffic, but to local drivers, as well, who apply extra caution as they turn on and off of the route.

“I have no doubt that the planned thruway will provide for a safer interstate system.”

A bypass that would separate the two types of traffic has been the dream of community members for decades. This fall, when ground is broken for a bridge across the Susquehanna River’s West Branch, construction for the bypass will officially get underway.

Overseeing it is Maggie (Powers) Jackson, a 2008 Pennsylvania College of Technology graduate with a bachelor’s degree in civil engineering technology. Jackson is managing the $669 million Central Susquehanna Valley Transportation Project for the Pennsylvania Department of Transportation.

“Getting construction moving will most likely feel surreal and slightly overwhelming,” said Jackson, who said it has taken decades of resilience, determination and hard work to move the project forward, not only within PennDOT, but many supporting agencies, consulting firms and the public.

“After 40 years of false starts, the CSVT will soon become a reality,” said Pennsylvania Sen. Gene Yaw, who is chairman of Penn College’s board of directors. “This is a smart, strategic transportation investment in our region that will create hundreds of jobs and bring relief to thousands of motorists traveling daily along US 11/15. As one of those motorists, I have no doubt that the planned thruway will provide for a safer interstate system by relieving traffic congestion, improving the flow of goods and services throughout the region, and benefiting the environment by reducing auto emissions.”

“The alignment, as we know it today, has been in development since the mid-’90s,” Jackson explained. “However, the idea to improve the transportation system within the Central Susquehanna Valley started as early as the ’60s.” 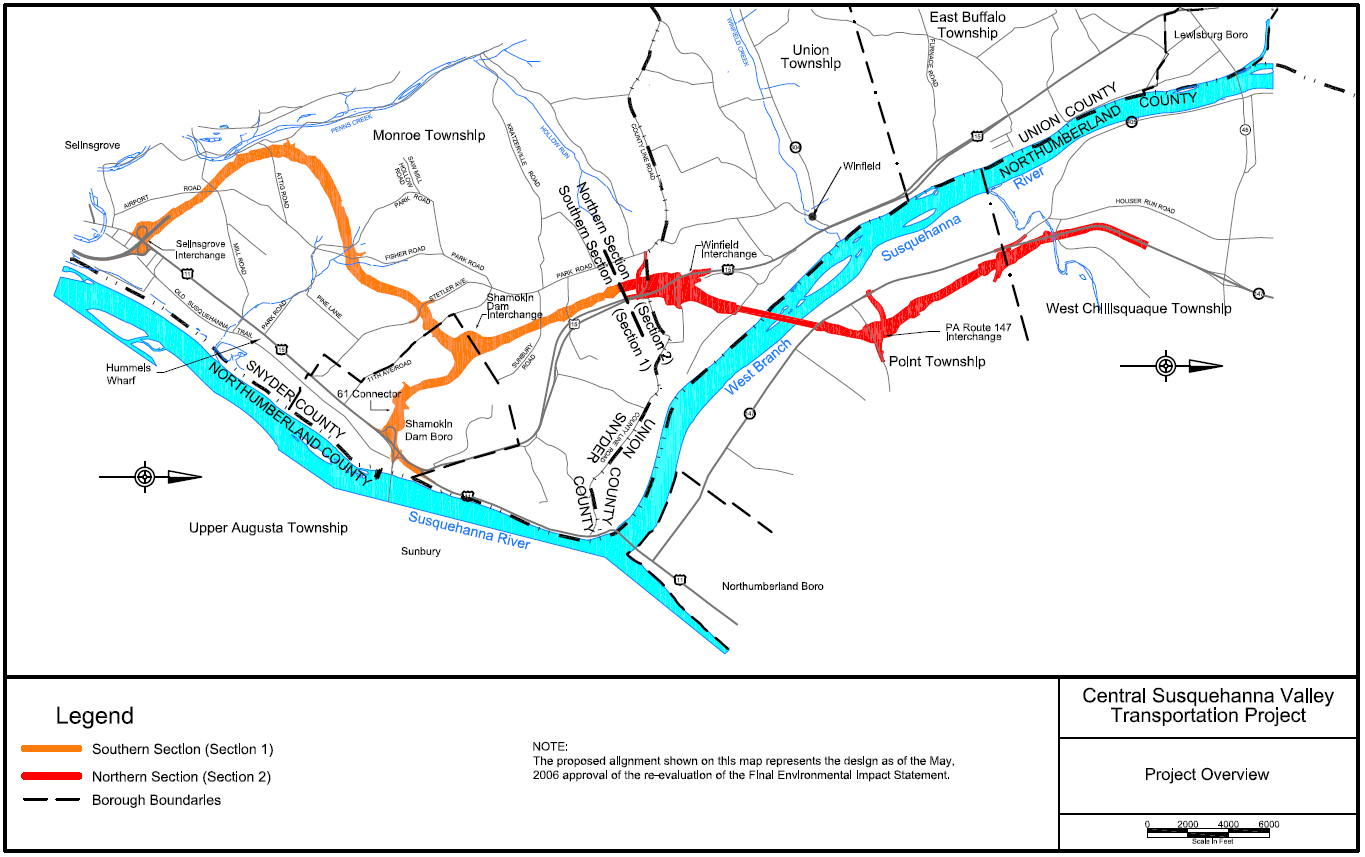 While a bypass stretching from the community of Selinsgrove to Shamokin Dam was designed in the early 1970s, only the Selinsgrove portion was completed by 1977. In the decades since, the population in the Central Susquehanna Valley has continued to grow, increasing congestion in the area and prompting continued petitions from the public.

In the mid-1990s, PennDOT was given permission to study the area. In 2003, an environmental impact statement for the project was approved. And then it awaited funding.

It remained, dormant, on state and federal transportation improvement programs until 2013, when Pennsylvania legislators approved the Act 89 Transportation Bill. With funding in place, PennDOT wasted no time in moving the project forward, tapping Jackson as the 13-mile project’s manager.

“In addition to the engineering skills needed, managing any-size project requires foresight, prioritization, time-management, mediation, communication, record-keeping and decision-making skills, to name a few,” he said. “For a project like CSVT that involves a large river bridge, multilane highways and substantial right-of-way acquisitions, these skills need to be applied to solve numerous complex problems at a faster pace than a typical project.”

Jackson began working for PennDOT five years ago as a civil engineer in training. In that role, she gained experience in various departments. Most recently she had been a bridge engineer.

She was encouraged by colleagues in PennDOT’s District 3-0 office in Montoursville to seek the manager role for CSVT and is quick to point to the help she receives from her supervisor, her assistant project manager and other departments.

With the project back in motion, the first steps have included a re-evaluation of the previously approved environmental impact statement and making good on the department’s promise to the public that, with money in place, it would deliver the bridge contract by August 2015 and have the entire project completed by 2024.

“It has been a challenge to pick back up where progress was left off after shelving for extensive time periods, especially on a condensed schedule,” Jackson said.

It is appropriate for Jackson that the first piece of construction for the project is a bridge. As a child, each time she packed up with her parents and three older brothers for the five-hour trip to her grandparents’ house in Maryland, she had a single request: that her father wake her before they crossed the Chesapeake Bay Bridge.

Called an engineering triumph, the 4.3-mile bridge was the world’s largest continuous steel structure over water when it opened in 1952.

“As a young child, it was exciting to cross over the bay and see the boats below,” Jackson said. “As I got older, I became more interested in the architectural components, and later, I was curious how the bridge was able to stay up and service the large amount of traffic.”

Only when she was in college did she realize her fascination could become a career path.

Jackson had taken her father’s advice to all four of his children – who he recognized had strong math and science skills – by starting her college career in a technical major. (Her father reasoned that if his children decided to change majors, it would go more smoothly if they had already taken the higher math and science courses required of technical studies.) She enrolled in electrical engineering at Penn State.

Groundbreaking for a bridge that will cross the Susquehanna River’s West Branch near Winfield is expected in October. The bridge represents the first of seven contracts that, by 2024, will complete a 13-mile bypass to ease traffic congestion along U.S. Route 15 north of Selinsgrove. Rendering courtesy of PennDOT.

But she quickly realized it was not the best fit.

With encouragement from her father, who reminded her of her childhood interest, and her boyfriend, now husband, Justin, a 2006 Penn College graduate who was already enrolled in its civil engineering technology major, she changed campuses and courses of study. (Justin is a project manager for McTish, Kunkel & Associates.)

Stephens, who taught all of Jackson’s “structural” classes, was always happy to answer questions and provided career guidance, Jackson said.

“Maggie was an outstanding student,” Stephens recalls. “She was a great team member – both in leading the team and in being sure that everyone on the team was not only involved but doing their part.”

Sprinsky, Jackson said, taught “in his own manner.” She said her first encounter with the Army Corps of Engineers veteran nearly brought her to tears.

“He had high expectations and made it known,” she said.

But she adapted to his teaching style and learned to meet his rigorous standards.

“When it came time for me to apply for my first job, I asked if I could use him as a reference,” she said. “He looked up from his desk and very matter-of-factly told me: ‘Yes, ma’am, because I’m impressed.’

“That’s all he had to say. I finally felt his acceptance.” (And she landed the job.)

As Jackson progressed through her studies, her interest in bridges continued to evolve.

“I started to gain an understanding of how bridges need to be designed to withstand not only their own weight (i.e., dead load), but to withstand other loads, such as traffic, wind and seismic, to name a few. … Not only did I view bridges as interesting from an architectural standpoint, but now I would think about how all the different forces acted on the bridge and how it resisted them.”

While not as unique as the Chesapeake Bay Bridge, the bridge that will cross the Susquehanna River has its own set of intriguing features. To be built in Winfield (just south of Lewisburg), the 4,545-foot structure will be supported by piers that range from 60 feet to 180 feet in height. (That’s as tall as 10 average-size giraffes.) It will require roughly 50,000 cubic yards of concrete – enough to fill about 15 Olympic-size swimming pools – and 20,000 tons of steel – equal to the weight of 133 blue whales. 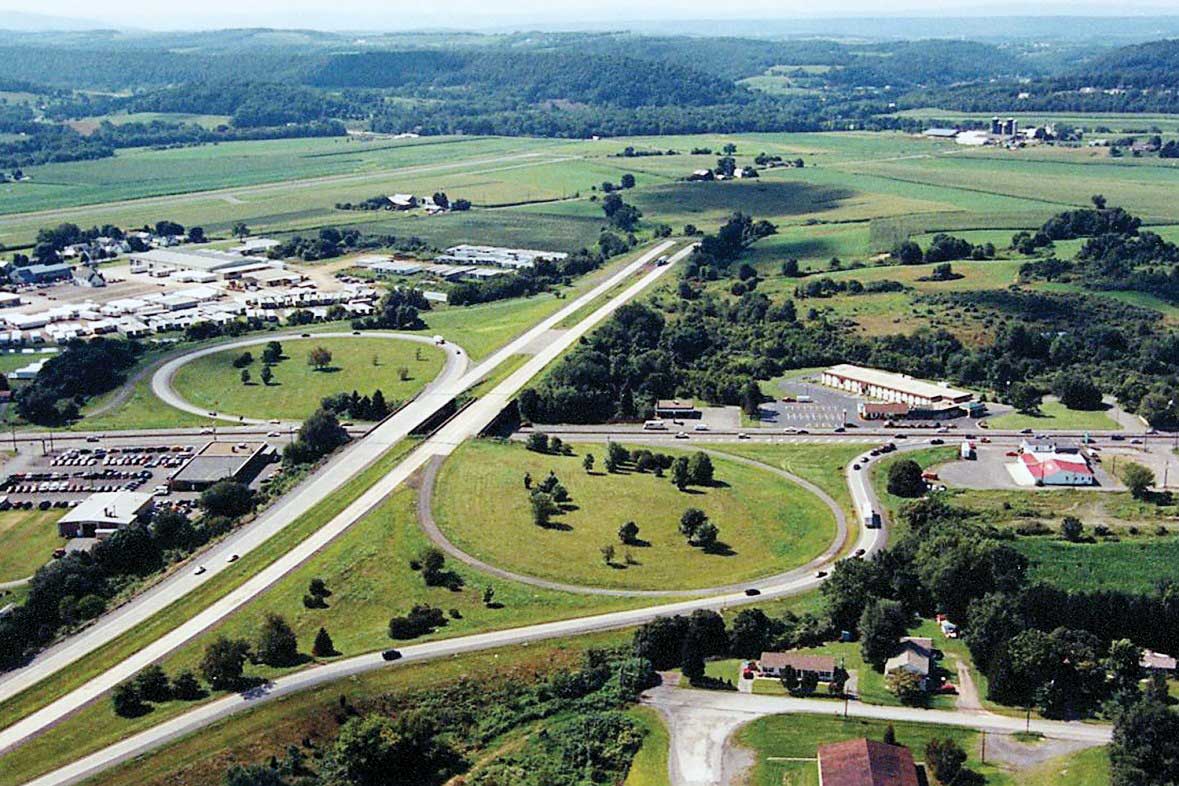 When complete, the new four-lane, limited-access highway will extend nearly 13 miles from the existing Selinsgrove Bypass in Snyder County north to the interchange between PA Route 147 and PA Route 45 in Northumberland County, where 147 becomes a four-lane divided highway and eventually joins with Interstate 180.

But how does a $669 million construction project get from A to B? Via 150 public meetings. Via environmental studies that detail potential impacts to wildlife, water, air, soil and personal property. Via permitting and collaboration with such agencies as the state Department of Environmental Protection, Federal Emergency Management Agency and the Federal Highway Administration, in addition to municipal governments, homeowners groups, historical societies and chambers of commerce. All were painstakingly analyzed in determining the route the new bypass will take.

“Coordination between local, state and federal agencies for environmental permitting and other necessary clearances can be demanding and challenging at times,” Jackson said.

Also a challenge is the complexity of the project, which includes “just about every civil design and engineering element associated with PennDOT roadway and bridge construction,” Jackson explained. In fact, nearly every department at PennDOT District 3-0 provides assistance.

“This project requires what you might call ‘all hands on-deck,’” she said. “There are also many consulting firms contributing to the design of the project, each with its own project manager.”

“It’s the project manager’s responsibility to make sure that all of these parties are delivering their contributions on time and to be the conduit of information flow between them,” Penn College’s Fedor explained. “The project manager has to be the liaison between all these parties and, more or less, keep a bunch of people that may have competing interests working toward the same goal.”

Jackson said the task requires many meetings among those involved in order for efficient and effective progress to continue.

Still, she said, one of the most challenging balancing acts has been learning to juggle her dual positions of project manager and mom.

“My professional career at PennDOT requires dedication, especially with this project and my responsibilities, but it has been a very rewarding opportunity that I’m not taking for granted. But at the same time, I keep it in perspective to my other priorities. My regular day starts and ends with making sure my family has everything they need.”

In between, her daily work is to keep the Central Susquehanna Valley Transportation Project on schedule, on budget and safe, ultimately helping to keep Pennsylvania’s roadways safe for tens of thousands of other families. ■

The U.S. Department of Labor’s Bureau of Labor Statistics predicts that employment for civil engineers is projected to grow faster than the average for all occupations, citing an aging infrastructure (that is, roadways, water pipes, railway systems and the like) and a growing population that will need new water systems and more waste-treatment plants.